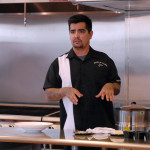 “Cooking is a connection to someone’s soul,” Chef Aaron Sanchez told Culinary Arts students as the very first guest artist for the newly launched discipline. Mentoring reaches deep into Chef Aaron’s core, a role he learned from Chef Paul Prudhomme when he began an apprenticeship at age 16 with Louisiana’s legendary chef. Today, Chef Aaron co-stars on The Food Network’s Heat Seekers and Chopped. His restaurants Centrico (New York City) and Mestizo (Kansas City) earn rave reviews, and he was nominated by the James Beard Foundation as Rising Star Chef of the Year in 2005.

In New Orleans last October to unveil his new menu for Crossroads at the House of Blues, Chef Aaron came by NOCCA for a cooking demonstration. Students were grilled on seasoning methods, cooking garlic without turning it bitter, the advantages to buying spices whole and grinding yourself, never boiling spices but toasting them to wake them up, and adding fresh herbs last to keep the chlorophyll from oxidating and turning drab. These things are “the difference between good and exceptional,” Chef Aaron urged students. “Culinary Arts centers on structure, discipline and mentoring; and you have all of that right here. You will see cooks try to emulate their mentors. But somewhere along the way, you have to develop your own stamp. And when you do find out who you are, share it.” 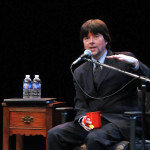 “What would you change in history if you could?” asked a student of documentary filmmaker Ken Burns.  “I would stop the assassination of Abraham Lincoln,” he answered.  “I am curious as to what Lincoln’s emphasis on our better angels after the Civil War…what might have happened.”  Burn’s answer was central to the hour-long master class he led with Media Arts, Jazz and Academic Studio students at NOCCA in October.  “‘Who are we?’ is the question that has animated my life’s work.  Great men do great things, but they are not the only stories.  I’ve found out there’s no such thing as ordinary people.”  He offered insights into his pioneering techniques, such as his pan and zoom process.  “You start at the bottom of a picture that shows two gun holsters…and slowly pan up…to a child’s face.  Tell a good story,” he said simply, “and everything comes in its wake.  The key to success is being honest and working hard.” 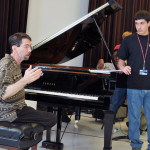 FRED HERSCH
Alone at the Vanguard

“What was happening there? I felt an energy drop,” renowned jazz pianist, composer and educator Fred Hersch asked a quintet of Level III Jazz students who had just performed. “You might want to continue something you heard in the last person’s solo. The saxophonist left you with something interesting and you didn’t use it.” Hersch’s own trio is nothing short of brilliant in seamlessly transitioning between solos, and they tried to help students improve on this element of jazz. “I heard three pieces today, all in the same tempo. There’s a lot more to jazz. While it’s important to be able to swing, it’s important to try other things. The key to all of this is really concentrated listening. I encourage everyone to take one track and listen to it six to seven times in a row; first for enjoyment, then to notice the details. Go through and get a lot out of one track. That way when you play you’ll listen to yourself better.” 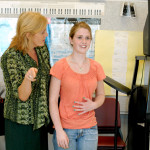 “Where in your body do you think your voice is coming from?” soprano and alumna Jeanne-Michèle Charbonnet asked a student who had just sung for her. The student looked unsure. “Your voice is not being supported by breath, but by the tension in your throat.” Learning to control exhalation while still breathing is one of the hardest things for a young singer to master. Jeanne-Michèle showed students highly specific techniques to move forward. “When I sing,” the soprano explained, “it is me against 110 people in the orchestra for up to five hours. Singing is hard work, it is an athletic sport. You have to learn to have the right amount of energy and air for each phrase.” And a life-lesson: “In singing, there is no finishing point. It is about the journey. Whenever you figure one thing out, something else changes.” 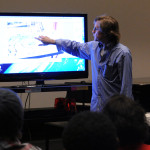 After filming a scene from Broken City at NOCCA, art director and production designer Tom Duffield opened his master class for Theatre Design, Media Arts and Visual Arts students with admiration for NOCCA. “You students are really lucky! This is one of the best schools I’ve ever seen. Not to mention New Orleans is the film capital of the world right now.”

While showing extensive examples of his work, Duffield explained how much more goes into movie-making than people realize. “As a production designer, you design not just the building and set, but also the action.” Duffield starts with an idea and after copious amounts of research he creates 2D sketches, then 3D models, and finally a life-size set. “To give a set flavor you have to have depth and detail. It is really good if you can draw — hand drawings have soul. A computer can fill in later, and even then, it can be your best friend and your worst enemy.”

Duffield’s right hand assistant was 2005 NOCCA Creative Writing graduate Sophia Alonza. Sophia, who came to speak with Tom, landed her first job with Disney after taking advantage of their summer internship program. Duffield, too, spent a summer in college as a tour guide with Universal Studios. “It was one of the best jobs I ever had.” It exposed him to the movie business and the people in front of and behind the scenes. When Tom’s degree in architecture wasn’t paying the bills, he looked into getting a job with Universal Studios’ Art Department. It launched his career. Sophia had similar advice for students: “Take advantage of the opportunities given to you. Trust me.” 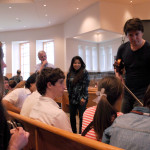 As soon as Classical Music students heard that Joshua Bell would be in New Orleans to perform with the Louisiana Philharmonic Orchestra, they asked if they could sit in on his dress rehearsal. “Even though it was a rehearsal, Bell was very concerned with each part of the orchestra and listened attentively both while he was playing and when he was not,” observed Level III cellist Angelique Montes. “His emotional response to the music made the performance all the more captivating.” During a break, Bell took time to talk to the students who were enthralled by his generosity as well as his love for chamber music, a focus of NOCCA’s Classical department. Bell took up the violin at age four; he made his professional debut with the Philadelphia Orchestra at age 14. “It was inspiring for us,” said Angelique, “to hear how his dream became a reality because of his hard work and passion for music.”

The NOCCA Institute is now the NOCCA Foundation!

In the spring of 2021, we officially changed our name from The NOCCA Institute to the NOCCA Foundation. We haven’t changed our mission, though–we still work every day to offer programs that improve NOCCA’s educational landscape, support students and faculty, and offer great arts experiences for the community. When you support us, you support all that and more!