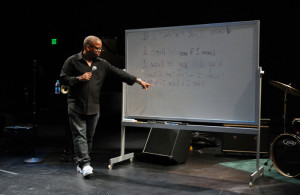 “The thing about finding yourself as an artist is that at some point, you have to make a commitment,” alumnus and award-winning trumpeter and composer Terence Blanchard told Music and Media Arts students in a composition workshop. Terence, who has released more than 20 albums and composed for 45 films, has also just premiered his first opera, Champion, about the life of boxer Emile Griffith commissioned by the Opera Theatre St. Louis.

To begin to grasp compositional techniques, Terence led students in a specific exercise to help them see the infinite ways to create a musical theme, understanding all the while that “the music has to grow. If it stays the same, the audience gets bored. If something’s not working, you have to put yourself into finding out why.”

“The hardest thing to do is to write something that is meaningful. You have to be brave enough to do this. And you have to make a connection between who you are as a person, letting this guide you as an artist.” Terence voiced what he knew students were thinking: “Am I good enough? Does what I do matter? Do you know how many times I, Wynton, or Branford were called corny because we couldn’t wait to get to NOCCA. If I had followed those people, I wouldn’t be doing anything that I’m doing now. You can’t see your career now, but have your own passion. When you walk down that path, you will become a leader.” 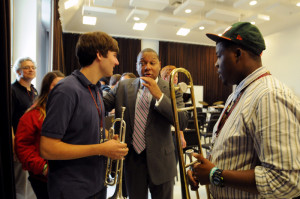 “My father was always saying — learn about classical music and Louis Armstrong. But when I was young, I equated jazz with a gig that no one was at,” Wynton expressed in a master class centered on the two genres. Then, as Wynton explained, he started listening to classical music, including Beethoven’s 5th Symphony. “Someone wrote this in 1802! This dude was bad.”

Over the course of an hour, Wynton delved into his development as a classical musician, the backstory to his early recordings and the decision he made to focus on jazz. “I quit classical music because I realized I couldn’t be really good at both classical and jazz. Classical music, however, is an unbelievable body of music. I still study its orchestration and coach it.”

The lecture turned to critique of upper-level Jazz students’ performance of Charlie Parker’s Billie’s Bounce and cellist Angelique Montes’ performance of Bach’s Cello Suites No. 3 Prelude – but returned to what performing and creating music will require of these young artists. In the Bach piece, “there is a depth of thought, concentration and sacrifice,” Wynton explained. “This is profound music that has stayed with us.” He turned to Angelique and asked with a smile, “Did you notice how your playing changed the feeling in the room? When a person can touch an audience in that way, that is profound. If you want to be good bad enough, you will practice,” Wynton told students. “The world needs more musicians. But it has to be a choice, because this is too difficult to be forced.” 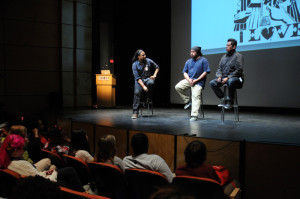 “My camera has taken me everywhere,” Brandan Bmike Odums told students as he described his journey since graduating from NOCCA in 2003. That includes travels to San Carlos, AZ where he made a film about Native American artist Douglas Miles, an Apache-Akimel O’odham painter and printmaker. Miles and painter Breeze Marcus, a member of the Tohono O’odham Nation, came to New Orleans to paint several murals as part of the New Orleans Jazz & Heritage Festival. Brandan, co-founder of 2-Cent Entertainment, invited his fellow artists to NOCCA for a deeply thoughtful master class with students. Breeze and Douglas shared their experiences and stories as members of Native American tribes as part of the process to help students grappling with the essential question Brandan posed for himself back in 2003: “I was trained how to create, but now what do I create?” “Your voice is extremely important. Your voice is about the past, present and future,” Douglas offered students. “The voice comes from doing things. It is already there. Experience builds confidence, and confidence allows you to dig inside to find the voice. Just do you. You are your art.” 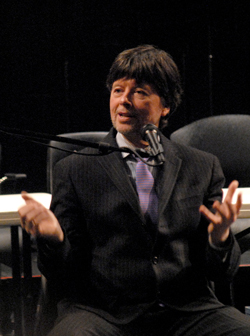 And more words of wisdom…

Craig Black
Aspen Santa Fe Ballet
“If you take class as if you are performing already, there is no transition when you do.”

Ken Burns
Documentary filmmaker
“There is more discovery and growth from failure than success. My profound wish for all of you is that you can say ‘I have the best job in the world.’”

Colby Foytik, Jason Kappus, Brad Weinstock
Touring company of Jersey Boys
“Is the dream all it’s cracked up to be?” a Musical Theatre student asked Jersey Boys’  lead actors.  “The dream,” said Foytik, “is doing good work wherever you are.”

Phillip Lopate
Essayist, poet, teacher
“There has got to be a place for introspection in writing. It is hard to be a good writer without knowing yourself.”

Delfeayo Marsalis
Trombonist, producer, alumnus
“You are leading the audience on an emotional journey.  You have to listen to the totality of the music.”

Ellis Marsalis
Jazz pianist, educator, NOCCA founding faculty member
“When I started, I decided I was going to play as good as I could, even if there were only two people in the audience. I later realized that this was a way of instilling discipline and integrity in what you were doing.”