Co-presented by The NOCCA Institute and the New Orleans Ballet Association
“A breath of fresh air!” — New York Times

Hailed by The New York Times as “a breath of fresh air,” Aspen Santa Fe Ballet is always at the forefront of American dance with its innovative, sleek style, adventurous repertoire and a dedication to commissioning new works from top international choreographers for over 20 years. Led by Jean-Philippe Malaty and celebrated Joffrey Ballet dancer Tom Mossbrucker, the company of 11 brilliant dancers brings a joyous program to the intimate NOCCA stage with stunning contemporary ballets by innovative masters Alejandro Cerrudo, Cayetano Soto and Jorma Elo.

Tickets are $45 for NOCCA fans (use the code “NOCCA”).  Tickets are available online at NOBAdance.com, by calling 504-522-0996, or by visiting NOBA’s box office at 935 Gravier Street, Suite 800. Discounted tickets for students and subscriptions for the remainder of NOBA’s 2017-18 season are also available.

Lend a hand at the concessions table before performances and during intermission, and you’ll receive a complimentary ticket to see this amazing company in concert!

Volunteers should be 21 years of age or older and be able to arrive one hour before curtain. To sign up, just email Richard at rread@noccainstitute.com. 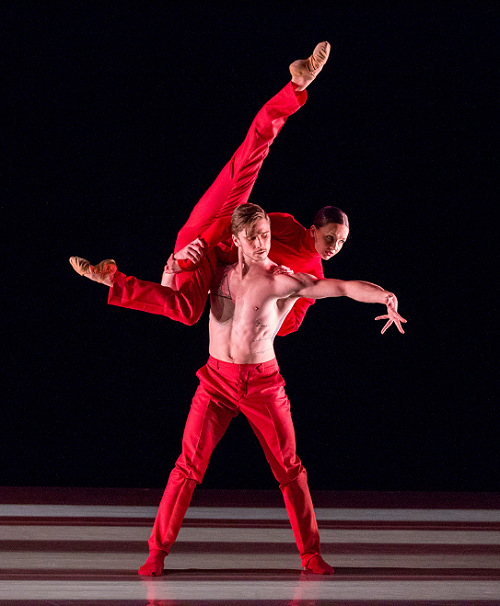 The triple bill program opens with the futuristic 1st Flash created by Boston Ballet resident choreographer Jorma Elo, who is one of the most sought-after dance makers in the world.  Set to Jean Sibelius’s Concerto for Violin and Orchestra, 1st Flash “shows off the dancers’ expertise, technique and power,” raves artistic director Tom Mossbrucker. The work is highly physical, very bravura, with super-complex movement that showcases the Finnish choreographer’s very distinctive style.

The poetic and touching Silent Ghost by Alejandro Cerrudo, set to haunting music by Dustin Hamman, King Creosote & John Hopkins, Ólafur Arnalds, and Nils Frahm is the centerpiece of the program.  Cerrudo is a master of creating intimacy and tenderness between dancers, and Silent Ghost tells a bittersweet story of relationships, longing and loss. Spanish-born Cerrudo is currently resident choreographer of Hubbard Street Dance Chicago.

The finale is the fun and playful spectacle Huma Rojo by Spanish dancemaker Cayentano Soto. Commissioned for the company’s 20th anniversary, this is his fifth work for ASFB.  With an all-Latin retro-soundtrack by icons Xavier Cugat and Pérez Prado Orchestras, Abbe Lane, Ray Barretto and Nat “King” Cole and dancers dressed in vibrant red costumes, Huma Rojo (the name of a protagonist in a Pedro Almodóvar film) is “part Tropicana floor show and part camp extravaganza,” that shows “a versatile ensemble capable of doing just about anything,” hails Bachtrack.

Audience discussions with Aspen Santa Fe Ballet directors and dancers will be held immediately following the evening performances on both November 10 and 11. The company will conduct master classes for students of the NORD/NOBA Center For Dance and NOCCA.

“This is a model of what a small classic company should be.”
– Clive Barnes, Dance Magazine

“The dancers of Aspen Santa Fe Ballet seem as comfortable in acrobatic turns and loose limbed falls as they are in soaring grand jetés and crisp fouettés.”
– Karen Campbell, The Boston Globe

“A twinge of wonderment that might charm the most cynical of New York dance fans…They raise the bar, and then they jump over it.”
– Jennifer Dunning, The New York Times

“Shape shifters who slip between pristine classicism and the oddest of contemporary movements with unconscious ease.”
– Janine Parker, The Boston Globe

“With the solid technique of the Aspen Santa Fe dancers, this small and ambitious company commissions pieces from little known dance makers and helps those artists develop. This is noble and necessary work.”
– Brian Seibert, The New York Times

Tom Mossbrucker Artistic Director
For the past 18 years, Mossbrucker has built a prestigious arts organization sharing two homes in Aspen and Santa Fe. In his role as artistic director, Mossbrucker cultivates highly sophisticated and challenging works of contemporary ballet. His shining achievement is ASFB’s roster of 28 ballets created on commission by leading global choreographers. Mossbrucker began dancing at age four, studying tap in his hometown of Tacoma, Washington. He pursued classical ballet training at the School of American Ballet and Joffrey Ballet School. His 20 years as a principal dancer with The Joffrey Ballet, performing in over 70 ballets under the direct coaching of founders Robert Joffrey and Gerald Arpino, coincided with a period of high artistic achievement for the company. Mossbrucker danced in works by great twentieth century choreographers George Balanchine, William Forsythe, Jiří Kylián, Mark Morris, Paul Taylor, and Twyla Tharp, among others. Signature roles included Lago in Jose Limon’s The Moor’s Pavane; Champion Roper in Agnes DeMille’s Rodeo; Billy in Eugene Loring’s Billy the Kid; and Romeo in John Cranko’s Romeo and Juliet. Mossbrucker brings this rich dance heritage to coaching dancers today. Mossbrucker and Executive Director Jean-Philippe Malaty were co-honored with the Joyce Theater Foundation Award in recognition of ASFB’s contribution to dance and the Santa Fe Community Foundation Piñon Award. A former board member of Dance USA, Mossbrucker currently serves on the board of The Gerald Arpino and Robert Joffrey Foundation.

Jean-Philippe Malaty Executive Director
Malaty was born in the Basque region of France. After receiving his baccalaureate in dance, he accepted scholarships to study at Mudra, Maurice Béjart’s school in Brussels, and at John Cranko’s ballet academy in Stuttgart. Invited by acclaimed instructor David Howard to study in New York, Malaty traveled to America under Howard’s tutelage. Malaty’s performance career began with Joffrey II. He also danced as a guest artist with Los Angeles Classical Ballet, Ballet Hispánico and Lyric Opera of Chicago. Malaty segued from the stage to an administrator role while still in his twenties. A key member of Aspen Santa Fe Ballet’s start-up team, Malaty has been central to developing the company’s unique dual-city business model. He directs operations in two locations, overseeing a $4.2 million budget that he allocates to the company, two schools, an esteemed presenting series, and an award-winning folkloric outreach program. In a daring managerial move, in 2014, Malaty added Juan Siddi Flamenco Santa Fe as a second performance company under the ASFB umbrella. Over the last decade, Malaty has received multiple accolades from the field. He has served as panelist for both the Colorado Council for the Arts and the National Endowment for Arts. The Denver Bonfils-Stanton Foundation granted him their Livingston Fellowship in recognition of his significant leadership role in Colorado’s non-profit sector. His first love is teaching, and when his schedule permits, he teaches company class and is a guest instructor at schools and universities. Malaty is proud to have forged a dance company infused with American energy, invention and eclecticism.

About NOBA
NOBA is the Central Gulf region’s premier presenting and service organization dedicated solely to the art of dance.  NOBA’s dynamic Main Stage season annually features a diverse array of world-class companies and artists.  Each year NOBA provides concerts, classes, workshops and lectures to more than 33,000 area dance enthusiasts of all ages.  In addition, NOBA’s nationally recognized, award-winning education programs provide the youth of our community access to quality arts programs with over 5,500 free dance classes and workshops annually at ten sites throughout the Greater New Orleans area.

About The NOCCA Institute
The New Orleans Center for Creative Arts (NOCCA) is a tuition-free arts conservatory for high school students and an agency of the State of Louisiana. The NOCCA Institute, a non-profit organization, provides support and advocacy for NOCCA. The Institute offers access to excellence in the arts for students, faculty, and the community-at-large. For information, please visit NOCCA.com and NOCCAInstitute.com.

Hotel accommodations are provided by Hyatt Regency New Orleans. Aspen Santa Fe Ballet is funded in part by a grant from South Arts in partnership with the NEA and the Louisiana Division of the Arts. The presentation of Silent Ghost is made possible by the New England Foundation for the Arts’ National Dance Project, with leading funding from the Doris Duke Charitable Foundation and The Andrew W. Mellon Foundation